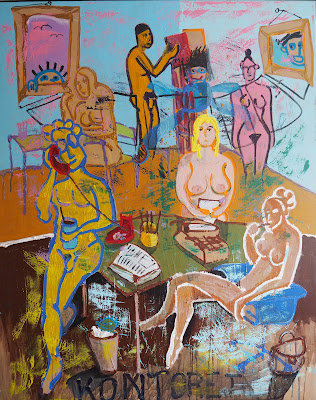 Lotte Kjoeller's painting 120x150 cm Acrylic on canvas is called "A greeting from us in the office". At the bottom of it is written in letters: The office in danish. This is an example of Lotte's work when she mixes text and art. Lotte is not only a painter, she also illustrates and writes poetry. So this award she had to accept.
Dante is considered the father of the Italian language; its fame is due to the paternity of the Comedìa, which became famous as the Divine Comedy and universally considered the greatest work written in Italian and one of the greatest masterpieces of world literature. Expression of medieval culture, filtered through the lyric of the Dolce stil novo, the Comedy is also an allegorical vehicle of human salvation, which is concretized in touching the dramas of the damned, the purgatorial pains and the celestial glories, allowing Dante to offer the reader a cross-section of morals and ethics.
Important linguist, political theorist and philosopher, Dante moved within the human knowledge, deeply marking the Italian literature of the following centuries and Western culture itself, so much so that he was nicknamed the "Supreme Poet" or, by definition, the "Poet". Dante, whose remains are found at the tomb in Ravenna built in 1780 by Camillo Morigia, has become one of the symbols of Italy in the world, thanks to the name of the main body for the diffusion of the Italian language, the Dante Alighieri Society.
In the March/April 2021 issue of the "Art International Contemporary Magazine", ample space will be devoted to the figure of Dante Alighieri and the artists of the past who portrayed him 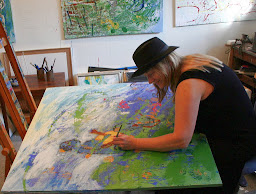 Sidevisninger i alt / Page views in all

I do not translate this blog anymore because you can easily translate it yourself here.

Søg i denne blog / Search in this blog

Eng: If you want to allow any anonymous or non-anonymous contribution to artist Lotte'Kjoellers work as an artist and/or blog you are very welcome. You can write on the message what to use the money as a payment. All contributions are welcome -small and big! You need to send the money into my account: mobilepay 23830717. From abroad you use: IBAN nr.: DK3753690000317316 SWIFT adr.: ALBADKKK 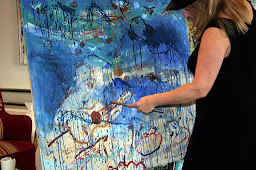